Gender & Power in the Street

Cesira becomes as a wild beast
A tree of age

Men prove particularly ominous in “Costa Magic,” the third and final poem in the sequence of “Italian Pictures.” As in the previous two poems in the series (“July in Vallombrosa” and “The Costa San Giorgio”), the female speaker initially is positioned as an observer of her surroundings but in “Costa Magic” she chooses to join the community of women that form to care for a sick neighbor girl, Cesira. This community rises in response to the patriarch who looms over the street scene in disapproval of his daughter’s plans to marry. He breaks the space of the first line’s insistent flush right arrangement, as though bursting the white space of the page to enter and generate the poem. 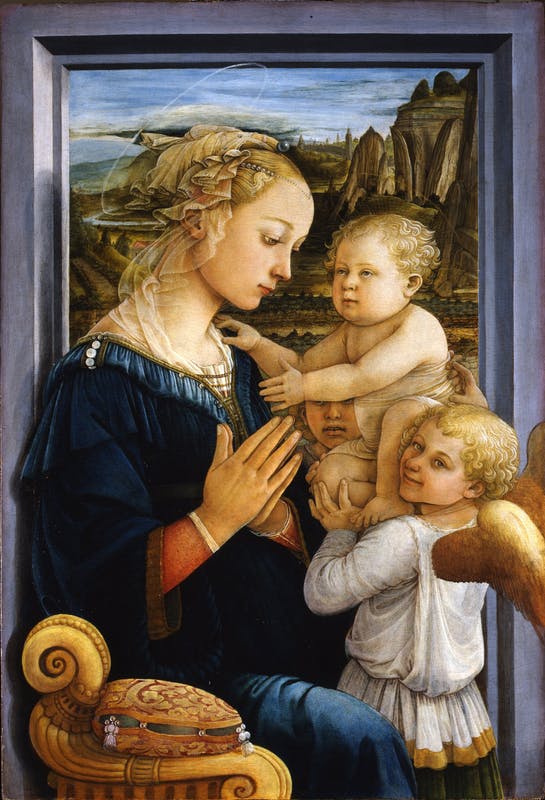 What is this “conception,” with its clear suggestions of fertility as a daughter’s duty but also in the sense of “conception” as a concept or plan or symbolic image? Symbolic image and biological pregnancy intertwine in the Catholic dogma of the Immaculate Conception, God’s intervention at the moment of Mary’s conception in the womb of Saint Anne, her mother, to absolve her of original sin so that the divine plan for Mary as the Mother of God might be realized without taint. (See Loy’s “Portrait of a Nun,” ‘mystic conception’.) What, however, is the “this one / Here” or the “yellow hair”? Is the father imagining a hearty (male) child that he wishes his daughter could conceive, Christ-like with “yellow hair” common to Florentine Renaissance iconography of the baby Jesus, as in Fra Lippo Lippi’s typical rendering in the “Madonna with the Child and Two Angels” (housed in Florence’s Uffizi gallery)?

Furthering the religious connotations of the father’s strictures and instructions to a daughter expected to be submissive, the father emerges “From the house.” As with the blank space preceding his appearance in the poem’s first line, his movement into the street is loaded with a sinister blank space linking his powerful movement (“Issuing”) with the signs of his authority (“Sunday dressed”). These signifiers of gendered power morph theological might with black magic, as he “Pours something / Viscous/ Malefic/ Unfamiliar.”
This act galvanizes a specifically male force on the street, as the speaker’s “I” realizes she hears her husband’s voice accompanying the father’s act in a ritual robbing the young woman of her life:

Mumbling at the window

White spaces within the lines again yawn as chasms of male power into which a woman can fall victim, while the columns of words visually divide the linear progression of the narrative, a move both Futurist in its use of typographic disruption and anti-Futurist in its indictment of a collective phallocentrism (evoked by the columns) tethering traditions of marriage and church with avant-garde revolution in a shared system of misogyny : “I hear my husband/ Mumbling / at the window.” Mable Dodge, in her autobiography, comments that Stephen Haweis would “delve into magic things and knew a few little magical tricks,” suggesting Loy ominously mirrors her husband in the poem (338).

Unlike in “Costa San Giorgio,” though, the female speaker of “Costa Magic”—self-identified as a wife—is now on the street while the husband is at the window. She has moved from outsider to participant, described by Tara Prescott as a “closeness, either emotionally or physically” (19) and by Carolyn Burke as a moment in which the “distance between observer and subject could collapse in moments of sympathy when—as in Futurist painting—she place herself inside of the scene” (199).

As Cesira suffers, “Being bewitched,” the ostensibly male doctor joins the coterie of men and male-dominated institutions. Briefly, his mention is surrounded and protected by the unspoken but overt white space of power that gives Cesira’s suffering a medical label that exonerates the father, diagnosing her with tuberculosis or “Phthisis.” Indeed, the doctor and the disease frame the line’s white space—“The doctor        Phthisis”—to suggest their pairing. The white space evokes a kind of disregard on the part of a doctor, as though he needn’t even explain, and also another kind of male-defined void for Cesira. Immediately, the poem’s “I” turns from doctor to the “wise woman” who actually issues instructions to the group of women that now include another neighbour, an aunt, and the speaker who all become a “we” with Cesira to follow the wise woman’s “instruction.”
Taking her in a cab, this group are “Bunched together” in trying to save her and extract her from the men and their magic. At first, their destination is unclear. Are they going to a hospital, perhaps?
When the cab almost crashes and “Jerks back my girl on the padding,” the instructions of the wise woman become clear. Through a mechanical violence that the Futurist might admire as an aggressive excitement, Loy’s speaker instead experiences a connective tenderness for “my girl” at the same moment that the wise woman’s “magic tree” appears. The tree’s magic resides not in curing the girl but in revealing, through a kind of counter-magic, the root of Cesira’s bewitchment enabled among a cluster of men—father, husband, doctor.
As “Cesira becomes a wild beast” at the tree, the women realize the “wise woman’s instruction,” for if she “should not become a wild beast / It is merely Phthisis,” a proof of tuberculosis that would exonerate the men. However, when she transforms into a wild beast, the men are suspect. The women,  “Knowing she has to die / . . . drive home / To wait.”
In their waiting and their trust in the magic tree’s revelation, the community of women implicitly share the speaker’s condemnation of the father’s “unnatural” relation with his daughter, a “Bewitching” rife with erotic, incestuous suggestions:


It is unnatural in a Father

This final stanza rediagnoses the ailment from the counter-magical perspective of women, a perspective perceiving an “unnatural” system of masculine power crossing and linking all nodes of authority. This understanding of a collective complicity that protects men and keeps them in power occupies the final line’s white spaces, chiming with other chasms severing the poem’s lines to register unspoken silences structuring women’s lives.

The poem’s compositional architecture, made up of glimpses and pieces, creates a network of connections between male-centered structures that collude in enforcing such silences as in, for example, the use of the upper-case F in the final “Father” that links the human “father” opening the poem with a patriarchal god. From that association, others multiply, such as the suggestive use of the word “conception” to point toward the Immaculate Conception as a narrative made by men for men to circumscribe and exploit women’s sexuality—as the human father possesses the daughter sexually but must maintain the illusion of her purity, the god-father removes the taint of original sin in joining with his daughter.