Mina Loy: Navigating the Avant-Garde is an experiment in modernist digital humanities (DH) that aims to move questions of design from the periphery to the center of scholarly attention. We contend that feminist design is fundamental to DH—not superficial, decorative, or ornamental. As a corollary, we reject the modernist claims that ornament is a crime and the decorative is superficial. This corollary is key, because, as Whitney Trettien asserts, “feminist design is the rejection of an artificial binary between utility and ornament.”1

The term “design” denotes the plan or blueprint of a project, its purpose and aims, as well as its aesthetics and function. Both a noun and a verb, “design” refers to structures and to the process of inventing them. It also encompasses matters of style and form—concerns modernist scholars may feel more confident addressing than questions of HTML, Java Script, Python, or R. While we may decode Gertrude Stein’s “Completed Portrait of Pablo Picasso” with relative ease—

—we may be baffled by the HTML markup that underlies it:

Fortunately, pioneering modernist DH scholars have mastered both the codes of twentieth-century, modernist experimentation and twenty-first century, digital innovation, and they’ve also embraced matters of style and aesthetics. To name just a few: 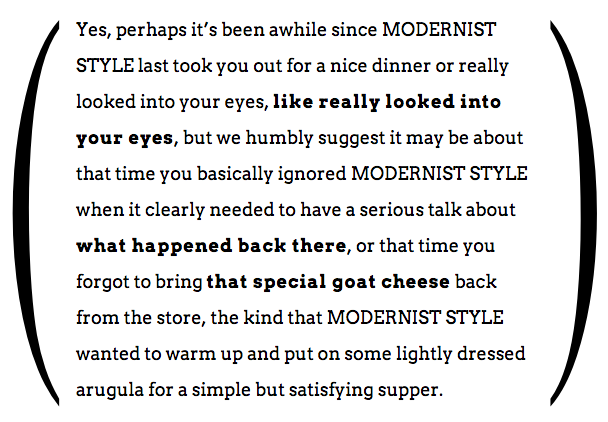 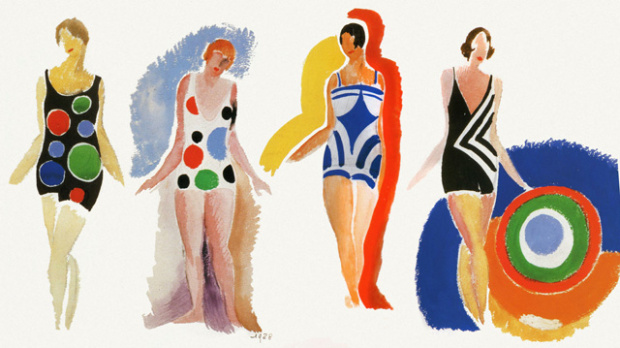 These innovative projects reflect a growing agreement that design is fundamental to digital humanities. In Digital_Humanities (MIT Press 2012), Anne Burdick, Johanna Drucker, Peter Lunenfeld, Todd Presner and Jeffrey Schnapp—five of the foremost leaders in DH today—underscore the importance of design, making it a keyword of their vision for the future of the field. Describing design as a “creative practice,” as well as an “intellectual method” of “thinking through practice,” they highlight its importance in making and communicating arguments:

Understanding the rhetoric of design, its persuasive force and central role in the shaping of arguments, is a critical tool for digital work in all disciplines.2

In online environments, good design is essential for effectively communicating what we know, but as Burdick et al point out, the design process can also teach us to think beyond what we know, allowing us to discover new ways to share research and involve audiences. In the digital era, “humanists, designers, and technologists working together can move beyond considering what can be done with the tools at hand to ask: ‘What can we imagine doing that may not yet be possible?” (12). For all their championing of the real and imagined possibilities for digital design, however, Burdick et al overlook a key component of its power: its feminist dimensions.

To give design its due is a feminist act. It involves recognizing readers as vital partners in the scholarly endeavor and embracing style and aesthetics as crucial to the work of digital humanities, rather than insufficiently techy or rigorous. It is not just about making websites look pretty, but about considering the audience’s needs and interests, meeting them where they are, inviting them to participate in humanities research, and providing a Baedeker to help them navigate the terrain. Feminist design also entails rethinking the processes of generating and disseminating knowledge. It calls for reinventing our scholarly methods in order to break down hierarchies, encourage open exchanges of expertise, reflect the diversity of human creative production, and make information accessible to a broad population.

Mina Loy: Navigating the Avant-Garde embodies and enacts these feminist principles. Our site design draws upon Loy’s aesthetics, aiming to provide an attractive, intuitively navigable environment for exploring her work. Inspired by Loy’s signature, our logo incorporates the elegant feet from Clara Tice’s drawing “Virgins Minus Dots,” which appeared opposite Loy’s poem “Virgins Plus Curtains Minus Dots” in the little magazine Rogue. Our parallax scroll homepage attempts to draw readers into her world, layering Baedeker maps from Florence, midtown Manhattan, Paris, and the Lower East side, with photos of Loy at the time she lived in those locations. We repurpose the “pricing index” from an e-commerce theme to invite users to read, interact, and time travel via the various affordances of our sites, ranging from a multimedia scholarly book, to timelines, maps, bios, art exhibits, side-by-side poems and close readings, a 3D animation, a Twine game, and en e-commerce site where you can “shop” for Loy’s inventions. We not only lure our audience in with a wide range of interactive content geared toward users of varying levels of expertise, but also invite them to join in the formation of a new, feminist theory of the avant-garde—what we called the “en dehors garde,” to account for artists who came from outside institutional structures, circulated on the margins of the avant-garde, and worked strategically to transform gendered, racialized literary traditions and visual cultures that excluded or objectified them.

Our collaborative methods of research, design, and production are feminist in the ways they break down hierarchies of expertise and prestige. Faculty, graduate students, undergrads, librarians, and IT staff worked together as equal partners in the making of this scholarly website. Our site design deliberately offers equal prominence to student-created projects, some of which are grouped under “New Frequencies,” because they reside on servers where their creators own their own data. Others, such as bios, timelines, and StoryMaps are interspersed with our own contributions. We set up systems for collaborative and public peer review, in order to make sure that all of the content on the site meets scholarly standards, while giving students the freedom to experiment beyond the traditional scholarly essay format.

Crucial to our principles of feminist design and our aim to make Loy’s work accessible to a diverse readership is a commitment to meeting standards for web accessibility. We have tried to uphold WebAIM’s web accessibility guidelines in the design of our site:

All of the material in our multimedia scholarly book is free and available to anyone with access to the internet, and we’ve copyrighted it with a Creative Commons license that allows users to reuse the material with attributions. We also share a free, open-access DH Scholarship Theme, developed by Greg Lord. By sharing this theme, we hope to inspire spin off projects on other underrepresented figures in the avant-garde, and to empower others to create their own scholarly websites, built on a foundation of feminist designs.

Sections in this chapter: